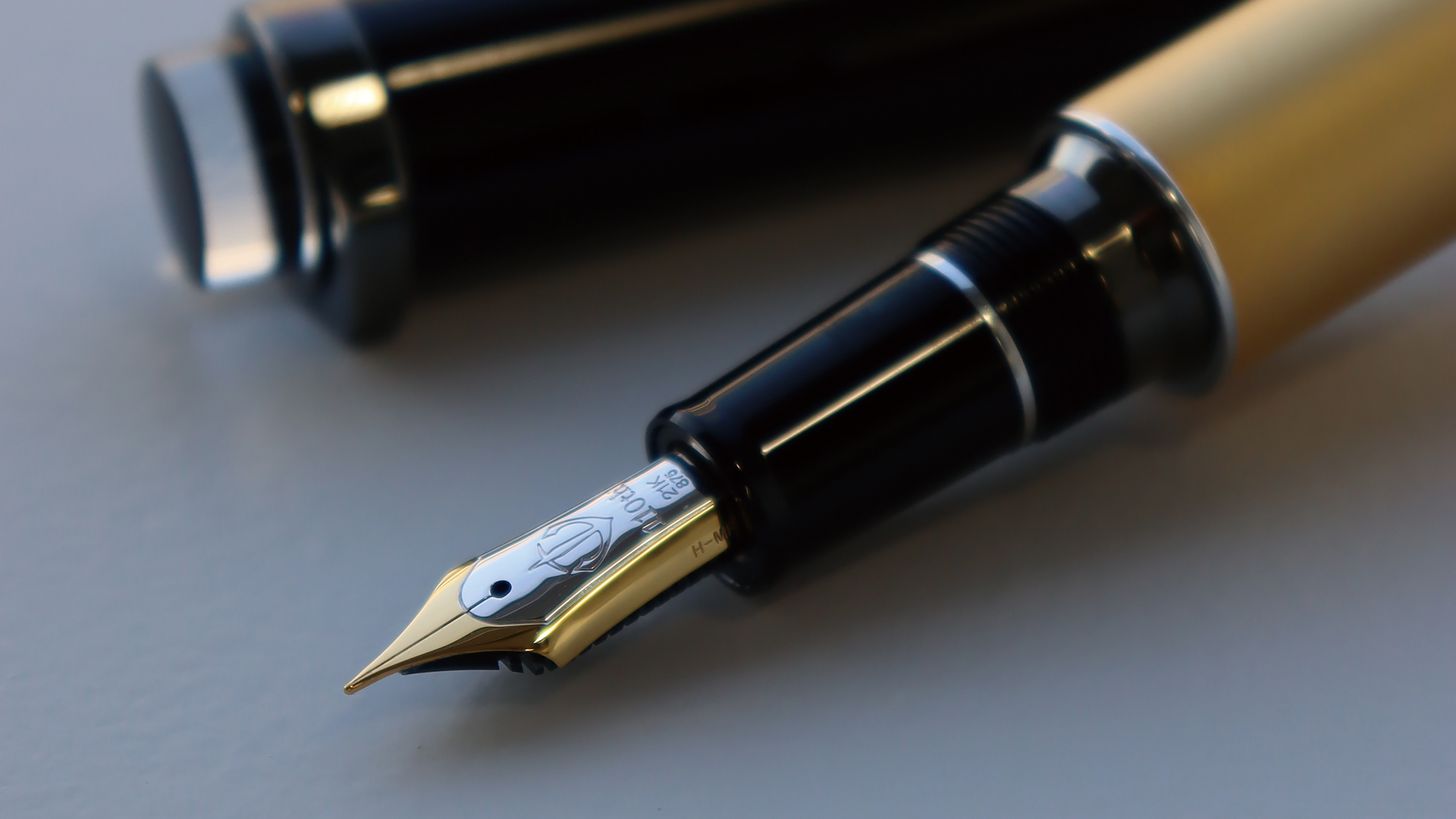 In 2021, SAILOR Fountain Pen celebrates the 110th anniversary of its founding in 1911.
The 110th Anniversary Fountain Pen is a limited edition commemorative fountain pen that symbolizes the future of SAILOR Fountain Pen with its individuality and strong presence.
It comes in three different styles, all of which are based on the three cornerstones of our CI: Authenticity, Technology, and Design.

The 21-karat gold barrel is linked to the image of SAILOR’s original 21-karat gold nib, which is backed by the technology and strong commitment to writing quality that we have cultivated over the years.
The matte finish, which suppresses the luster and gives the material its genuine beauty and relaxed appearance, feels comfortable in the palm of your hand, and the well-balanced design provides excitement for a more natural writing flow.
Both the flexible and resilient 21-karat gold nib and the 21-karat gold barrel are inseparable materials for fountain pens, and both promise the best writing experience as a genuine instrument, not just a luxury material.

The use of a new electrolytic coloration technology enables deep black coloration while maintaining a metallic feel.
Unlike plating or painting, this technology grows an ultra-thin black oxide film on the surface of the material and uses light interference to recognize the color, so there is no risk of peeling off.
The coloration technology is an integral part of the genuinely black material giving it excellent durability and weather resistance.
While retaining the original feel of the metal material, the “unfading black” that is the result of mastering dignity, functionality, and design raises the status and prestige of the pen and provides you with an uplifting experience.
It is a supreme masterpiece brought about by the daring spirit of challenge that always aims for the highest level, fusing reliable technique backed by tradition with new techniques that are actively adopted.

The word sterling comes from the British silver currency called sterling pound, which means reliable and genuine.
Not only in the West, but also among people around the world, there are numerous myths and legends about silver, a material which has been passed down for generations and used in a mysterious manner since ancient times.
Together with the SAILOR’s anchor, which symbolizes trust and hope, we have adopted this material for the barrel due to its certainty and unchanging nature.
As a material that gains in brilliance and value through daily use, it becomes the perfect tool for constant utilization.
The white shine of SHIROGANE creates a dignity and beauty that cannot be expressed elsewhere, and it will surely become an instrument that delivers a “light of hope” to illuminate the future.

The 21-karat gold nib is the result of SAILOR Fountain Pen’s unique technology. The flexible nib is more resilient and does not run out of ink even under heavy pressure, ensuring a stable writing experience. The comfortable feel, also known as the feather touch, which glides across the paper as it bends, is a masterpiece that gives off the original feeling of a fountain pen. The nib of this limited edition pen is engraved with SAILOR’s symbolic anchor and the 110th anniversary memorial in the center, and finished in a bicolor. It is available in four widths: fine, medium-fine, medium and broad.

The color SAILOR BLUE-Dawn is the corporate color set by the new CI. The color is reminiscent of the scenery observed by the founder, Kyugoro Sakata, in Kure, the place where the company was founded. “Dawn” refers to the time when new things begin and represents the hope for today that is reminiscent of the beauty of the Seto Inland Sea before dawn. We should continue to see this hope in our eyes and our visions for the future. While reflecting on the origin of the CI color and our brand in general, we will set sail for the world beyond the sea to create reliable, quality technology combined with the graceful aesthetic sense of Japanese handicrafts. This is a new ink color that visualizes SAILOR’s vision.

Connecting to the future, the anchor, a symbol of trust and hope, has been and will continue to be a symbol of SAILOR’s reliable quality, containing the strength of our technical capabilities and a delicate, Japanese sense of beauty. The Premium model has an anchor shining in the sky, while the KUROGANE and SHIROGANE models have a bicolor, assertive plate anchor embedded as a symbol of constancy.

A common shape to support a sense of unity

This serves to protect the clipless body from damage. “since 1911” engraved on the front.

The new logo is engraved on the circumference. The logo is based on the spirit of the company’s early days, and reflects the Japanese sense of beauty through simplicity. The triple line symbolizes the trinity of Authenticity, Technology, and Design.

The serial number is laser engraved on the barrel ornament to signify the limited edition commemorative product. The Premium model is limited to 110 pens, and the KUROGANE and SHIROGANE are limited to 1,100 pens each.

The box that holds the 110th anniversary model is made using woodworking techniques in Hida Takayama, Gifu Prefecture, a famous production area for woodworking products in Japan. The material used is Japanese chestnut wood, which has been a well-known material for Japanese people since ancient times. Chestnut has been used as a building material since ancient times because of its hardness, moisture resistance, and durability. The fountain pen is carefully protected in a solid box made of solid, strong chestnut wood. The production was supervised by Ayayuki Kosaka , the second generation carver of Ichii itto Carvings, a traditional craft of Hida Takayama, and Kosaka hand-carved the nagurime texture for the premium version. Enjoy the warmth and beauty of the natural wood material and craftsman’s hand work.

The pen sheath that holds the 110th anniversary model is made of hemp cloth, which becomes softer and more comfortable to the pen as it is used, gaining an elegant luster and whiteness. The sheath not only protects the fountain pen, but also gives it a unique feel and texture for you to enjoy. The hemp cloth is a sustainable material that is strong, moisture-absorbent, and quick-drying. It has been an essential part of Japanese life since ancient times, but later disappeared due to restrictions on cultivation and unsuitability for spinning. This is a highly rare natural material that is almost impossible to find in circulation nowadays called, “the fabric that the Japanese have forgotten.”